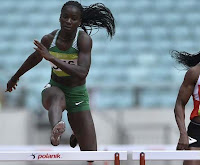 The 22 year-old won the 400m hurdles title in 55.53 at the 21st African championships in front of her home-crowd in Asaba, Delta State on August 5. The 2018 Commonwealth Games 4x400m Silver medallist was then absent from the African team at the Continental Cup in Ostrava.

In a piece of information made available on the Facebook page of African Athletics United, the date of control was not revealed, but if it happened to take place before or in Asaba, the 400m hurdles medals may end up being redistributed, in case the disciplinary process leads to a sanction.

Giving detail of the suspension, AIU said Nathaniel was sanctioned because of “Presence of a Prohibited Substance (Stanozolol) (Article 2.1)”.

According to AIU, a Provisional Suspension is when an Athlete or other Person is suspended temporarily from participating in any competition or activity in Athletics prior to a final decision at a hearing conducted under the IAAF Anti-Doping Rules or the Integrity Code of Conduct.

“In doping cases, a Provisional Suspension is mandatory under the IAAF Anti-Doping Rules following an adverse analytical finding for any non-specified substance on the Prohibited List.

“A Provisional Suspension may be imposed in other doping cases depending on the nature and circumstances of the case in question.

“A Provisional Suspension imposed in a non-doping case does not in any way abrogate the presumption of innocence and it is not an early determination of guilt. Rather, it is an order made on a precautionary basis to safeguard the interests of the sport,” AIU said on its official website.